UniArt gemstone wholesaler offers a wide variety of agate products for both wholesale and retail purchase.

In this section you will find a special selection of products and you will also be able to obtain relevant information about the agate stone, its properties, characteristics, meaning and legends. Keep reading... 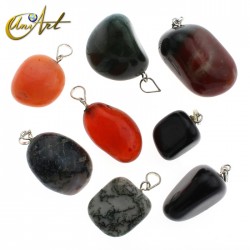 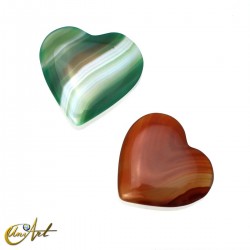 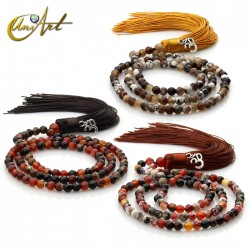 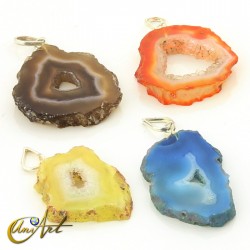 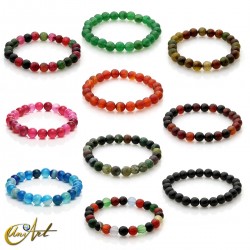 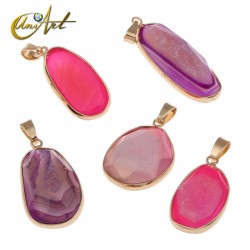 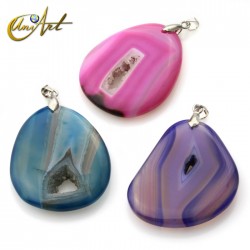 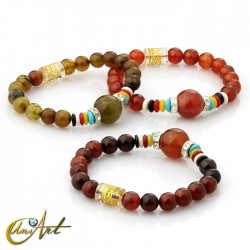 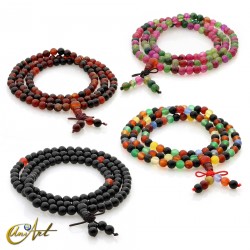 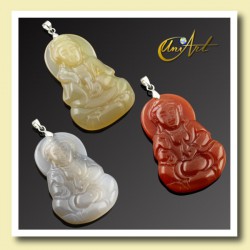 Guanyin pendant of agate or carnelian 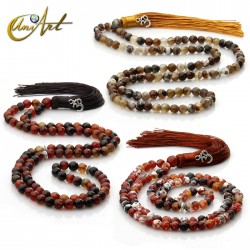 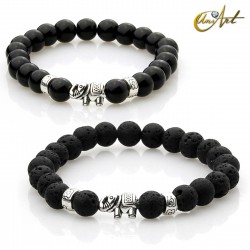 Agate or lava bracelet with elephant 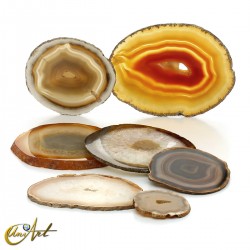 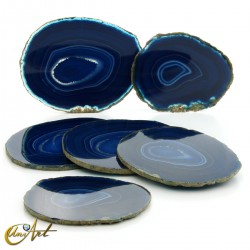 Agate is a very popular and well-known stone, but it is actually a sub-variety of chalcedony, which is itself a type of quartz.

Although all agates are a type of chalcedony, the term chalcedony is popularly used to describe just some types of agates, such as translucent white and bluish naturally or those that are crystal flower formations, usually grayish in color.

The other varieties of chalcedony are considered as different types of agate and some of them have their own name, such as black onyx, which is actually a type of agate without transparency and totally black or like carnelian, also called de carnelian that is nothing less than a reddish agate.

Due to the great variety of this stone, it is very difficult to establish a characteristic that defines it and perhaps its main characteristic is this diversity.

Agate can occur in nature in various shapes and colors, it may have numerous associations with other minerals, various vein patterns, and various types of inclusions. Its luster is vitreous and when polished it shows a lot of shine. Chemically, this mineral is made up of silicon dioxide (SiO 2 ).

The most common types of agate have bands of different shades and even different colors. This is due to the fact that its crystallization, in most cases, develops in the cavities of volcanic rocks through the deposition of layers of silica.

Layers overlap at different stages of crystallization causing alternating bands and colors. With that and because each cavity has a different format, the agate formations are unique in terms of colors and patterns.

Many times these formations, which are called agate geodes, they remain hollow giving rise to the formation of crystals of quartz, amethyst, calcite and other minerals. Most geodes are clad externally with layers of agate.

Agate in history and its legends:

Agate was and continues to be one of the most used materials in artistic stone carving.

Since the Neolithic period, artifacts carved in agate stone have been used. In various civilizations since prehistoric times, this stone has been used to make ornaments, amulets and decorative objects.

In ancient Greece and in the Egypt of the pharaohs, important medicinal powers were attributed to this mineral and thus the use of agate spread throughout Africa and the Middle East until the Russian Empire.

In Tibet until today, agates that have bands that resemble eyes or geometric patterns are used as amulets, these types of agates are called Dzis and according to legends they are treasures of the gods.

Originally the agate received its name from the Greek philosopher and naturalist Theophrastus, who discovered it around III and IV BC. C. along the banks of the river Archates (Dirillo) in Sicily.

In more recent history, the role of agate was fundamental for the German city of Idar-Oberstein to become one of the main gems trade poles in the world.

The Idar-Oberstein area was already, until the 18th century, a great producer of jasper and agate carvings due to the combination of several factors, but it was the emigration of several of its citizens to Brazil that pushed the local industry to stand out even more.

These emigrants found in the south of Brazil, in 1827, the most important agate deposit in the world, both in abundance and quality.

It did not take long for this mineral to be sent to its homeland and thus, with the combination of the good quality of the raw material from Brazil and the high technical knowledge they had there, Idar-Oberstein has become a world reference in the carving and trading of semi-precious stones.

Energetic properties of agate according to esotericism:

According to esotericism, the energetic properties of agate are as numerous as its plurality of colors.

When it is used to harmonize the chakras, the most appropriate is to choose agates of colors corresponding to the chakras you want to treat.

Thus we can understand that green agates are used to benefit the heart chakra and those with yellow tones are used for the solar plexus chakra.

According to metaphysicians who manipulate the energies of gems and minerals, agate is a stone that provides balance both on the physical plane and on the mental and spiritual plane.

In this framework, agate is considered a powerful ally to achieve eloquence, self-confidence and courage in addition to enhancing creativity.

It is the stone of prosperity and therefore closely related to good luck and wealth. It is recommended to put a decorative piece of agate at the entrance of the home or workplace to add wealth and protect against the evil eye.

According to feng shui, this practice is especially suitable for commercial premises.

As previously clarified, this semi-precious stone was considered by the ancients as a medicinal and magical stone.

In India it was used to treat eye diseases and in Tibet it is still considered a powerful amulet. For the ancient Egyptians, agate was effective against poisonous stings. In Arab countries there was a belief that an agate ring guaranteed longevity.

Agate and its colors: What is the true color of agate?

Agate can be found in nature in different shades of brown, yellow, terracotta, orange, reddish, gray, green, as well as white or black.

The most appreciated natural colors in use of agate in jewelry are the pale blue of the so-called blue chalcedony, the dark orange of the carnelian and the deep black of the black onyx.

The natural colors of agate tend not to be vibrant. With the exception of carnelian, which can be fiery red, the other naturally colored agates are either pale or dark in color. For example, the natural green of the agate has olive hues while the natural blue is grayish and pale.

However, it is possible to find agates of the most attractive and varied colors for sale. These very striking colors such as indigo blue, purple, pink and even some shades of bright green are actually the result of stone dyeing.

By means of pigmentation methods, the agate can have a very beautiful appearance since the colors highlight its bands and veins. These dyed agates are widely used in decoration and jewelry.

As the pigmentation process does not remove properties from the stone, artificial colored agates can be used in esotericism and feng shui in the same way as an original colored agate.

Even, according to chromotherapy, it is believed that the added color provides more beneficial properties to the stone which in turn acts as a catalyst for color power.

The name given to a type of agate may refer to its appearance, such as banded agate, which refers to its parallel bands, or to its origin, as is the case of Botswana agate, which is typical of the African country. from Botswana.

Generally these names are used commercially and have no basis in geology.

We can identify the most prominent types of agate by their commercial names:

Where to buy agate?

At UniArt we want to be your agate supplier. At buy agate wholesale or in detail In our online store you have the security of receiving quality products at the best price. On our website we have a wide variety of agate stone products from decorative pieces to the most delicate jewels.

Also, if you want to mount agate bracelets or necklaces we have a large assortment of agate beads to mount jewelry.