Auralite 23 and Super Seven, Amethysts of the new age.

Auralite and super seven (super seven or melody stone) are the trade names given to some varieties of amethyst that have certain special inclusions and specific associations with other minerals and chemical elements.

It is known that a crystal, be it of any mineral, can contain several types of inclusions and be associated with other different minerals. It is also known that the purer it is, which means the fewer inclusions the mineral has, the more valued it will be. But every rule has its exceptions, inclusions and associations can be very special and provide certain characteristics and properties to the crystal that, instead of despising it, make it more rare and valued.

Super seven amethysts and auralite amethysts are exceptions to the rule. Due to their "impurities" these stones are highly appreciated and valued both by collectors and by those looking for metaphysical properties in minerals.

Super seven and aurelite crystals are very beautiful and rare. They are zoned and striped, with different tones and colors.

In the esoteric realm, countless spiritual and energy channeling powers are attributed to them.

It can be said that they are sister stones since both are based on amethyst quartz and common components. 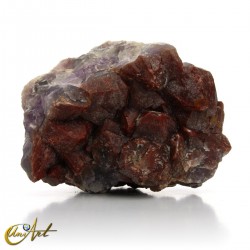 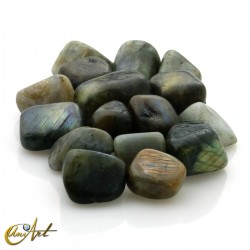 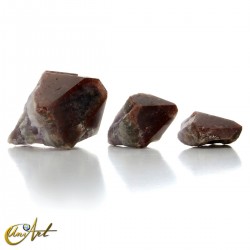 To be called super seven or melody, a stone must contain, apart from the amethyst base, other six components resulting in an association of seven different minerals.

So a super seven stone is actually a mixture of amethyst, crystal quartz, smoky quartz, rutile, lepidochrosite, goethite, and cacoxenite. These minerals can be visible to the naked eye as inclusions, bands or areas of different colors but they can also be hidden inside the crystal or present as traces detected only by a mineralogical analysis.

The presence of these minerals does not exclude other components, this type of amethyst being very complex stones with a composition very rich in chemical elements.

What is auralite 23 amethyst?

When we find a very extensive range of elements present in the amethyst crystals, we then go to the auralite level.

Auralite 23 presents all the components of super seven and also many others, being that it can have more than 35 different chemical elements in its composition and at least 17 combined elements.

By means of analysis using X-ray diffraction, the following chemical elements have been found in various auralite samples in different concentrations:

The result of the combination of these chemical elements during the formation of auralite crystals are the multiple minerals that make up this very special stone.

In an auralite stone the following minerals can be found in their crystalline form: titanite, cacoxenite, lepidochrosite, ajoite, hematite, magnetite, pyrite, goethite, pyrolusite, limonite, sphalerite, covelline, chalcopyrite, gialite, epidote, bornite and rutile, in addition to the metals gold, silver, platinum, nickel, copper and iron, adding up to a total of 23 possible components. Hence, its name is often accompanied by the number 23. These components are associated with the quartz matrix, which in turn can contain white or crystalline quartz, smoky quartz and, in greater quantity, purple quartz (amethyst).

Like the super seven, the auralite is very complex and at the same time very beautiful.

The two stones have as a matrix an association of quartz where amethyst predominates and the two stones may contain inclusions of rutile, lepidochrosite, goethite and cacoxenite but the crystals of the so-called auralites have a reddish coloration at the tips, as if they had been coated. This very special color of the auralite tips is due to the high concentration of the aforementioned elements, mainly hematite.

With this information we can conclude that both super senven and auralite are actually amethysts with special mineralogical and chemical characteristics, some similar and others different but both from the same quartz family.

How to identify and differentiate super seven and aurelite?

It is important to emphasize that the presence of these elements and minerals in these stones is totally random, being that some samples may present a greater number of components than others and in different quantities. We can also assume that larger specimens have a greater wealth of components.

It should also be noted that it is not possible to identify all these elements with the naked eye. In both super seven amethyst and auralite amethyst, if we do not have technical means of analysis, we can observe the bands and areas and through their colors and characteristics suppose which minerals and components are present, but then we will only discover the visible components.

The appearance of the super seven is very similar to that of an amethyst but contains zones and bands of different colors and tones (purple, white, crystalline, yellow, grayish, and sometimes greenish). Also, when it is gem-quality and cut for jewelry, rutile and goethite inclusions can be better seen.

Aurelite also has these nuances and its main characteristic is the dark red color very similar to the color of the red jasper of the tips of its crystals, which are usually formed in drusen.

Unlike the super seven, auralite is not usually used in jewelry since the carving would remove the surface of the crystals, which is precisely the part that differentiates it from other quartz.

You can find African amethysts very similar to auralite but in the form of massive and not of druse, in this case the components that provide the red color are arranged in bands inside the stone and when carving them the result is very interesting and pretty.

Where does the super seven come from?

Remember that the name super seven is a trade name given to a special type of amethyst and refers to the seven minerals that make it up. It is also called Melody stone, perhaps because there are seven musical notes as well as the minerals of the super seven.

The first time this type of quartz has been identified has been in the Brazilian province of Espirito Santo. However, there are many other regions of Brazil that produce amethysts with the same characteristics and that, due to their components, can also be named that way. In addition, similar deposits are found in Africa and Madagascar.

Where does Auralita 23 come from?

Auralite is also a trade name, that is, it does not correspond to a scientific nomenclature that defines this type of amethyst. Actually there is a mineral officially called "auralite" and that has no relation to auralite 23, being much less known to the general public than auralite amethyst.

It is very likely that the first time that the name auralite was used to name this kind of amethyst was made in favor of Canadian amethysts and in honor of the Aurora Borealis, the curious thing is that several mines in Canada have not adopted the Auralite name to represent their red-crowned amethysts and they market their production as "Thunder Bay Amethyst" because of its origin from the Thunder Bay district of Ontario.

Like super seven, auralite amethyst can be found in amethyst deposits where geological conditions have contributed to the formation of crystals of complex chemical composition. Today, apart from the deposits in Canada, it is also common for auralites from Brazil and Africa to be marketed.

Properties of the super seven stone according to esotericism:

We know that the use of crystal energy in esotericism is not supported by scientific criteria but we cannot deny that there are a large number of people who follow and support these beliefs.

The super seven stone and its trade are closely related to esotericism as it is considered a "New Age" crystal.

According to metaphysical concepts, the importance of super seven amethyst derives from the special combination of minerals it presents. This stone is attributed all the powers of the minerals that make it up and this combination is considered very successful and prodigious in terms of its benefits.

From a holistic point of view, the super seven stone is considered a high vibration crystal that interacts with all the Chakras. It interweaves the spiritual and protective qualities of amethyst, the purifying power of smoky quartz, the amplifying and energy-channeling properties of crystal quartz, the potency and life force that rutile provides, all combined with the soothing properties of lepidocrocite, the attributes metaphysical of cacoxenite and harmonized by goethite.

That is why the super seven stone is highly sought after and valued and within the esoteric approach it is considered a very powerful and versatile crystal useful at all levels of energy work being a perfect ally for the most experienced and a multipurpose wildcard for those who They do not have much knowledge and do not know which mineral to choose for their daily benefit.

Auralite 23 and its spiritual and metaphysical properties:

After what has been said about the super seven and knowing that auralite has the same characteristics and many more, it is not difficult to imagine what is the significance attributed to auralite 23 amethyst in the esoteric sphere.

Beyond being considered a stone of the New Age, it is attributed the crystal condition of the New Consciousness. The adepts and defenders of the spiritual powers of auralite 23 affirm that this crystal has the ability to raise the spirit and consciousness of the person who possesses it to a new and very high level. From this perspective, the auralite would function as a portal that transcends the physical world and accesses the spiritual dimensions.

In the esoteric framework, all the components of auralite and its complex molecular structure act as a powerful dynamo of vital and spiritual energy, making it possible to achieve a high degree of psychic power, heightened consciousness and great clairvoyance.

How to buy super seven?

The best way to buy a super seven stone is to find a supplier that you can trust and that indicates the country of origin of the stone. The super seven amethysts from southeastern and central Brazil are more likely to have all the characteristics mentioned here than other amethysts from other deposits.

If you buy super seven on the Internet, you have to be very careful in relation to the stones from China or India since even if they are natural stones, it is very likely that they are African amethysts and not Brazilian.

In our online store we have several copies of super seven from the central area of ​​Brazil.

To buy auralite we have to take the same care mentioned above, but in this case the deposits in the North of Canada are equally conducive to those of Brazil, with Thunder Bay Amethysts from Canada being very similar to Brazilian aurelites.

We have brought from Brazil several specimens of auralite that are available in our online store.

Our online store makes it possible to buy aurelita 23 and the purchase of super seven wholesale and retail.

To see the wholesale prices of auralite and super seven, the client must register as a professional client and meet the wholesale client requirements.

By buying auralite wholesale or super seven in our online store you will be able to offer your customers these stones at the best price and with the best quality.